skip to main | skip to sidebar

When I started the blog again with the new build, I said I would be more disciplined in keeping it updated – of course that hasn’t happened.

I have been doing lots of things simultaneously as usual, instead of focusing on one thing at a time. I really should know better. So over the next few posts, there’s some progress on the various aspects of the build.

I have made a lot of progress with this. I have designed and constructed the carcasses for the following elements.

Main Instrument Panel (MIP) – This is constructed out of 9mm MDF and was designed by me on sketchup and cut with the big laser cutter at the Artifactory. It is full-size and is a one-man cockpit, so has space for the Captain side PFD (Primary Flying Display) and ND (Navigation Display) and the central console housing the ECAM (Electronic Centralised Aircraft Monitor). I have monitors in these spaces with the appropriate displays. I have also fabricated a sliding table – just like in the real cockpit. I haven’t fabricated the fronts yet. i can't until I get my displays sorted.

Pedestal – This is the box that sits between the pilots and houses the radios, flaps and speedbrake levers, and the MCDUs (Multi-function Control Display Units). It is made from 9mm MDF and again was designed by me on Sketchup and laser cut. Into this I have dropped a temporary switch panel that houses all the commonly used buttons and switches from the pedestal, glareshield and overhead. This enables me to use switches and buttons instead of the mouse and keyboard for most common tasks. I have these hooked up to 3 x USB joystick cards which gives me 36 digital inputs – almost enough (but not quite!!). The Aerosoft Airbus model comes with the facility to push the MCDU to a web browser so I’ve been using an iPad for this function at the  moment.

Overhead – This is the collection of panels that sits above the pilots’ heads and houses the switches and buttons for all the aircraft systems – lights, fuel, hydraulics, etc. I am now on version 3 of this carcass. Every time I create a new version, I think of improvements. I have also created a framework from high pressure PVC pipe that supports the Overhead in the appropriate place – I just need to paint it black.

Glareshield – I have designed this on Sketchup on 9mm MDF but haven’t cut it yet. The big laser cutter at the Artifactory has been temperamental of late. This is a bit irksome, as I have a few things to cut.

Sidestick Box – This is a box at the pilot’s left arm for the sidestick and nosewheel steering. I have designed this in 9mm MDF using Sketchup and will laser cut it when the laser cutter is operational again.

Seat – I have rescued a car seat from the bulk rubbish collection that was in good condition. I have built a box to stabilise it and get it to the right height. It is on castors and I have an idea about how to fabricate some J-rails. The space for the seat is very tight in a cockpit and the seats move back and around (in a J shape) on rails to let the pilot in and out.

Many people who fly simulators love the variety afforded them by the software. They fly fighter jets, little Cessnas, airliners and helicopters. There are many different aircraft available and various levels of “realism”.

I have always been interested in aviation and flying and took some lessons once upon a time – but they were very expensive and I had a family, so I had to stop. I have always had a secret desire to fly commercial airliners and when I decided to make my sim, I knew it would be based around an airliner. I also knew that I was after a level of realism and immersion that would require me to choose one aircraft and devote all my energy into making it as real as possible. I wanted to build a proper cockpit. I chose the Airbus A320 for several reasons.


Having decided on that, I built a PC that was capable of handling (at least initially) the A320 as I wanted to fly it.

There is a bewildering array of ways to fly a plane using your computer. Even when you have decided which aircraft you want to fly, there are lots of ways to do it. I knew I wanted to be flying as quickly as possible and as realistically as possible so I chose what is probably the easiest path. There may come a time when this no longer meets my needs and I will be prepared to change. To be realistic, the simulator has to model 3 “worlds”.

My setup is as follows.

OS: Windows 7
I’m very comfortable with Win7 and know it well. Although I have access to a free upgrade to Win10, I’m holding off until I see a compelling reason to upgrade.

Flight Simulator: Microsoft FSX: Steam Edition
I have used Microsoft FS for several years and am quite happy with it. The Steam edition seemed to be more stable and required less tweaking.

Flight Model : Aerosoft Airbus Extended A320
This has a great A320 cockpit and system emulation engine. It is very realistic – particularly on the systems side. It also has a nice payload/fuel manager and built-in Web Server that enables me to output the MCDU (the main flight planning computer) to an iPad – which is very cool.

Control Interface: FSUIPC
There are many knobs, switches and buttons in the A320 and they are not all mapped to the standard FSX keyboard and my joystick/throttle. FSUIPC enables me to map a whole load of common controls to keyboard keys or joystick buttons or even homebuilt switches.

Control Interface: LINDA
FSUIPC only takes you so far. In such a complex aircraft, not everything can be mapped using FSUIPC. LINDA is a LAU-based program that allows me to make my own switch and control panels and map common flight operations to them.

At present, my Sim doesn’t look very realistic. It runs across 6 screens and an iPad. However, it flies in a very realistic way. Your typical A320 pilot relies on programming the MCDU and using Autopilot and Autothrust for almost all of the flight. There is very little hand-flying. It all works very smoothly – as long as the prep-work is done properly. It might seem a bit odd, but for me, the joy is in the proper planning, programming and execution of a flight rather than hands-on flying, because that is how it’s done in the real thing. I get great satisfaction when I do everything right. It is always interesting when I stuff things up – those flights tend not to go so well because I don’t have much experience hand-flying. That will change over time, but for now I’m happy to fly the way the pro’s fly!!

In 2008, I started to build a replica Airbus A320 cockpit in my garage. It didn't get very far but I learned a lot. I eventually broke it down and disposed of the pieces. Part of my frustration was not being able to machine things precisely enough or create items that looked and behaved like the real thing.

Even though I got rid of it, I still had a desire to do it again  :)


So I built my new A320. One of the mistakes I made last time was to begin the construction before getting it flying. My new cockpit is all computer-based. It runs on 2 PCs, 6 screens (plus an iPad) and is based on Microsoft FSX:Steam Edition. 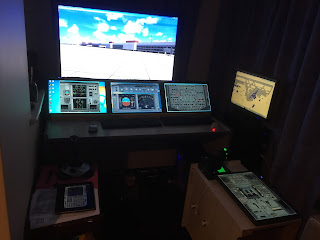 The plan is to keep it flying but gradually replace the screens with replica panels.